Do you remember Norton Commander?

It was one of the first dual-pane file managers – and probably the most influential one. John Socha created it in 1984, the year Apple famously launched the Macintosh.

John was 26 when he created NC. He had been commissioned to write a book about utility programs and needed an example. This "example" turned into a world-famous file manager. The reason it is called "Norton" is that John joined Peter Norton Computing and completed the first version there.

A fun fact about John is that he also invented screen savers. NC included one as well:

John works at Microsoft now. He even writes the odd blog post about jQuery.

Norton Commander set the tone for decades of file managers to come. One clone of NC that is still in use today is Midnight Commander: 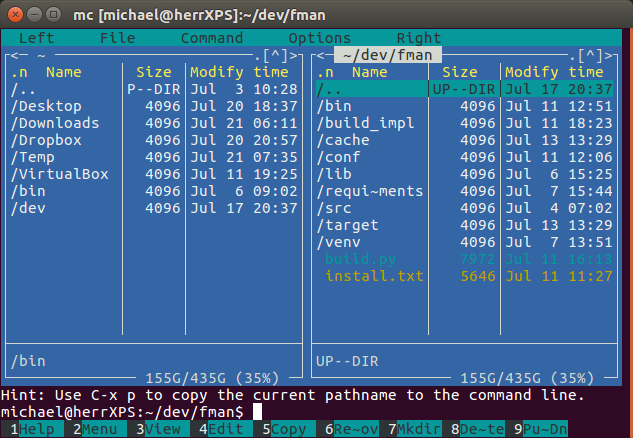 Like most dual-pane file managers, it gets the shortcuts from Norton Commander: F5 for copying files, etc.

Midnight Commander was created in 1994 by Miguel de Icaza. Like John, Miguel made his mark on other areas of computing as well: He later co-founded GNOME, the now default desktop environment of Ubuntu Linux.

On Windows, a clone of NC that is still popular is FAR: 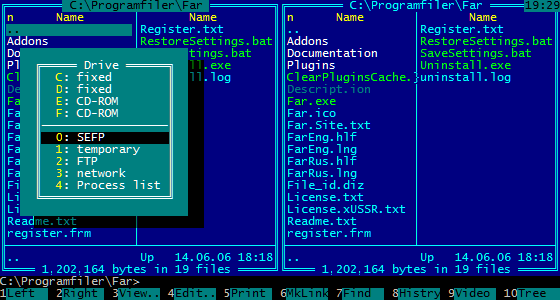 Does the name FAR remind you of a popular archive format? That's not a coincidence: Its creator Eugene Roshal also invented RAR and WinRAR.

Even before FAR, the first dual-pane file managers with a GUI appeared. In 1993, Christian Ghisler released what would later become Total Commander for Windows: 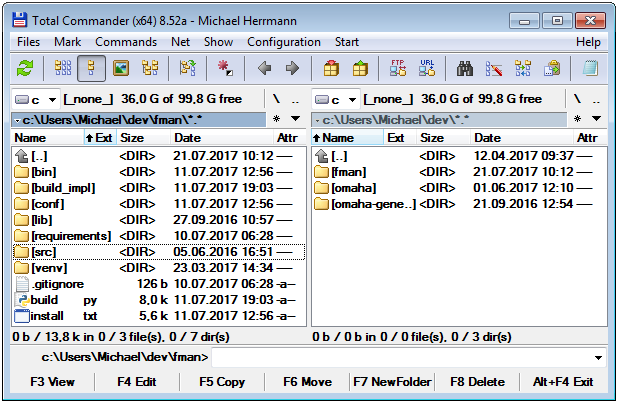 TC was originally called "Windows Commander". You can guess what happened: Mr. Ghisler received a friendly letter from Microsoft asking him to change the name.

Since then, there have been many iterations on the same theme. (Last I counted there were 98 dual-pane FMs in existence.) However, I would argue that the niche has not seen much innovation in the last 20 years.

Sublime Text has shown that it is possible to revolutionise even old niches like text editors. Wouldn't it be great if we could have the same surge of innovation for file managers?

fman is my attempt to answer this question. It's a dual-pane file manager that combines the best ideas from Total Commander and Sublime Text. If you enjoyed reading this article, then maybe you would like to check it out!