Today marks the first time a new version of fman is released to existing users transparently via the auto-update mechanism. The new version includes a few bug fixes and an implementation of the most-requested feature so far: Support for copy/cut/paste via the standard keyboard shortcuts. On Windows, these are Ctrl+C, Ctrl+X and Ctrl+V, respectively. On OS X, as in Finder, you copy via Cmd+C, paste via Cmd+V and paste-cut via Cmd+Alt+V. Of course, the implementation works so that you can copy from Finder/Explorer and paste into fman and vice versa.

To get the new version on OS X, restart fman twice, leaving it running for a few seconds each time while it downloads and applies a 260 KB update file. On Windows, it can take a few hours until you automatically get the new version. fman displays the version number in the status bar at the bottom of the screen. If it says 0.0.3, then you have the latest one.

The release of the new version took a little longer than hoped, mostly because the auto-update functionality still required some work. Following fman's I dare say democratic approach to development, you can see on the public feature requests list what the next feature will be: 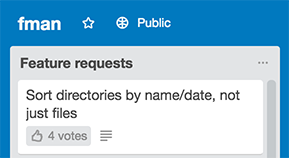 Next up are this (and possibly a few other) features, before work begins on the Linux version of fman. Stay tuned!