If you recall from the Year in Review post two months ago, I have begun to open source fman's build system ("fbs"). The motivations were a) it's the right thing to do to help other developers. And b) it may help pay my bills until fman is sustainable on its own.

Yesterday, I open sourced those parts of fman's build that generate the installers on Windows and Mac. I thought this would be a good time to start charging for fbs. It's offered under the GPL, which makes it free for open source projects but lets me charge for commercial use.

On a whim, I submitted fbs to Hacker News. I thought it could be well-received because fbs makes PyQt a viable alternative to Electron, which many HN readers despise for its bad performance. (PyQt and Electron are frameworks for creating desktop applications.)

When fman launched, it stayed on the front page of HN for 13+ hours. Even though it was only in the ~25th spot, this lead to many thousands of visitors to this web site.

Within minutes of submitting, fbs went to the third spot on the front page, then the second and finally – the first! Way higher than anything else I've ever submitted. 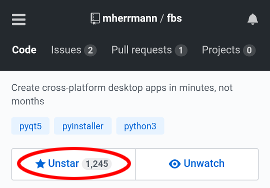 A small dent in the glory was that after an hour or so, the story of SpaceX's historic launch of the Falcon Heavy broke. This immediately kicked fbs down to the second spot. It's of course stupid to find this frustrating but I wouldn't have minded if it had stayed in #1 a little longer ;-) But I must also admit that SpaceX's story deserved it much more.

As a result of the traffic, the first commercial license for fbs was sold, for EUR 79. It's not much, but a start that proves there is a market. Given that fbs saves its users hundreds of hours, I guess that's not so surprising. But you never know until it actually happens.

The cool thing is that fman and fbs feed off each other. fbs merely open sources code I already have. It doesn't drain a lot of resources from fman. But as other people start to use it, it will actually make fman more stable. Win-win!