Being self-employed, I meticulously track the time I spend working. It's useful in many ways: First, it's interesting to see how much time a project takes. Second, it helps me stay sane and productive: If I've worked less than my goal of 40 hours in a week, then I need to do some more. On the other hand, if I have completed my quota, then I can allow myself to switch off.

Here is a screenshot of my Harvest time sheet since April 2012: 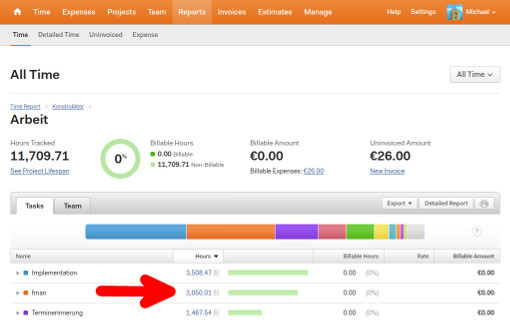 It's a little hard to read, but you can see that I've so far spent 3,050 hours working on fman. It's the second-largest project I've worked on so far. The first (titled "Implementation" in the screenshot) is a Polish IT startup I focused on from 2012 to 2014. The third ("Terminerinnerung") is my SMS reminder service for doctors in Austria, which I still draw passive income from.

By the end of this year, fman will be at the top of the above list. The race is on to see how much I can get done until then ;-)