As explained in this blog post, fman offers a minimalistic but very configurable context menu. This page shows how you can customize it. 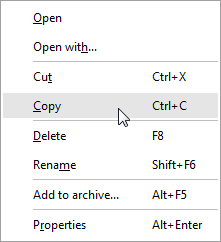 Every entry in the JSON file can have the following attributes:

caption
The text displayed for the item in the context menu. If the caption contains an ampersand &, then the character after it is used as the mnemonic for the item. For example, P&roperties has mnemonic r. So when the context menu is open and you press r, then the Properties item is immediately selected.
If the caption is a dash -, then the item is just a visual separator and can't have an associated command. See the JSON and the screenshot above for examples. Separators at the beginning and end of the context menu are not displayed but may still serve a purpose via the id attribute described below.
The caption is optional if you supply the command parameter.
command
The command that is executed when the context menu entry is clicked. For a complete list of commands, please see the core/commands directory in the Core plugin. As explained here, a command called DoSomething in the Core plugin is referenced as do_something in the JSON file.
args
Commands in fman can have arguments. This optional attribute lets you specify the parameters with which command should be invoked. It should be a dictionary {...}. For example:
id
Ids are useful to let you specify where a new item should be inserted in the context menu. For example, if you recall this section from the JSON file above: To append an item at the end of this section, you would create the following new JSON file: The "id": "clipboard" parts in your JSON file and the original would be matched to determine the point of insertion. The new context menu then looks as follows: 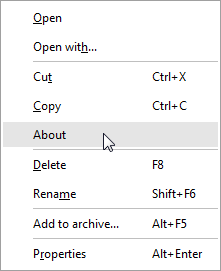 To extend the context menu, create the file Plugins/​User/​Settings/​File Context Menu.json in your data directory. Add entries to it as in the id example above. To apply your changes, open the Command Palette with Ctrl+Shift+P (or Cmd+Shift+P on Mac) and enter Reload plugins:

Once you have done this, the new entries in your context menu should start to appear.

Clicking inside a folder

The previous section mentioned File Context Menu.json. It defines the context menu when you click on a file. But there is also a (different) menu when you rightclick inside a directory (ie. not on a file):

The entries of this context menu are defined by the file Folder Context Menu.json.

JSON files describe which commands make up the context menu. The commands themselves are implemented in plugins such as Core. Some commands use the method is_visible() to define whether the command can currently be executed. For instance, the Paste command is only visible when there is a file on the clipboard. The context menu implementation uses this as well to selectively hide items.

fman is optimized to be used with the keyboard. You will often be significantly faster using the Command Palette than the context menu. If you can, try not to use the mouse. You will likely get much more out of fman this way.